Poole Pottery is a well known English pottery brand, based in Staffordshire. The pottery was founded in 1873 on Poole quayside, and produced pottery there by hand until moving to a factory in 1999.

Production continued at a new site in Sopers Lane until its closure in 2006 but the brand name lives on.

I recently acquired this beautiful dinner set, comprising 6 dinner plates, 6 salad plates, 6 desert plates, 2 tureens, 3 platters, 6 soup couples and saucers and a gravy boat and under plate.  It’s pretty unusual to find a complete dinner set in anything these days but this was one of the rarer patterns, “Ripple”, designed by AB Read in the 1950s.

Sadly I’ll probably have to split it to pass it on and this always seems a bit of a shame as it really is stunning in its entirety.  A wonderful example of the stylish and modern designs that Poole pottery was creating in the period known as mid-century covering the 1950s to the 1970s.  The entire set is available from http://www.antikseramika.co.uk, please contact mail@antikseramika.co.uk for further information. 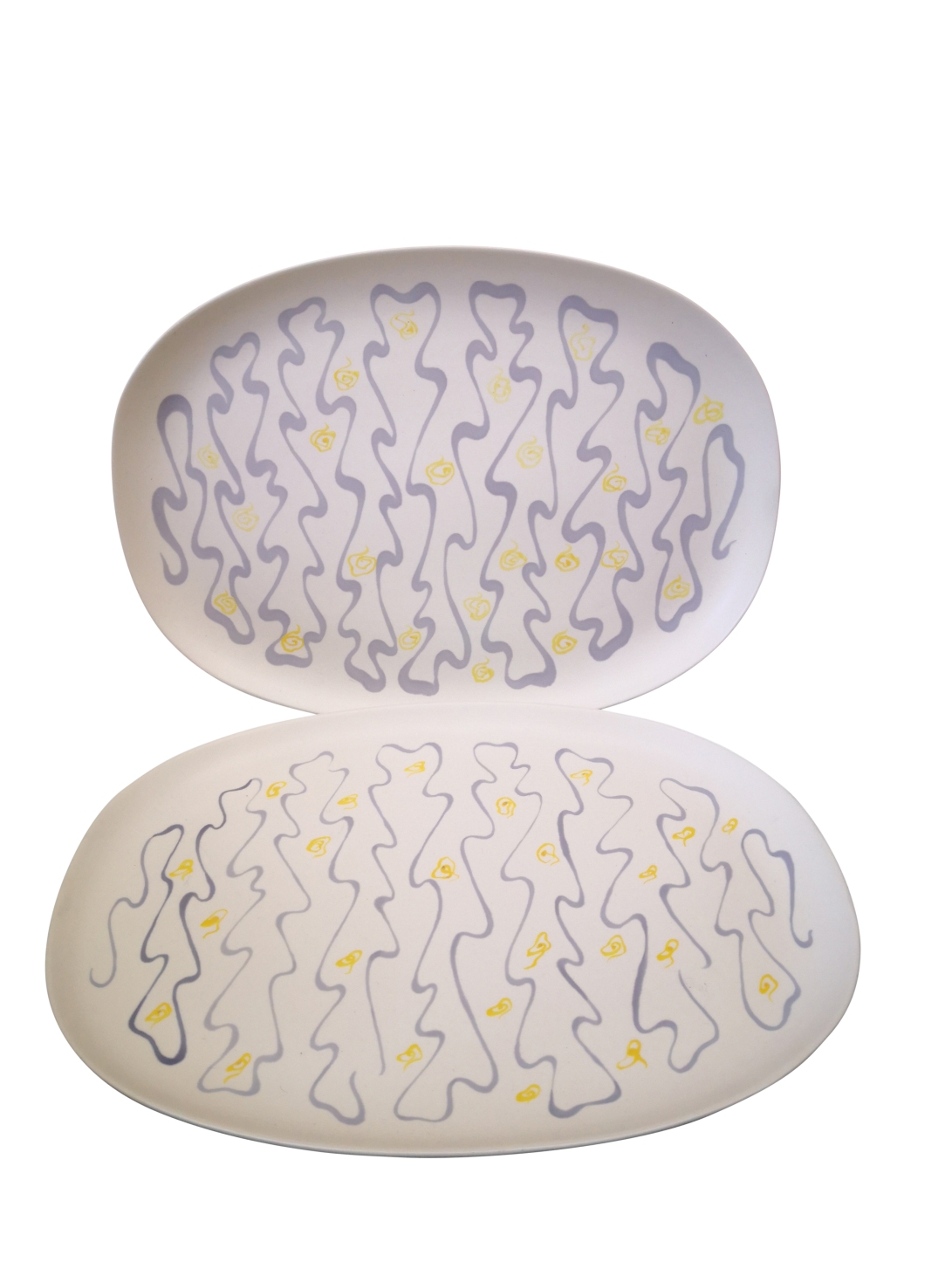 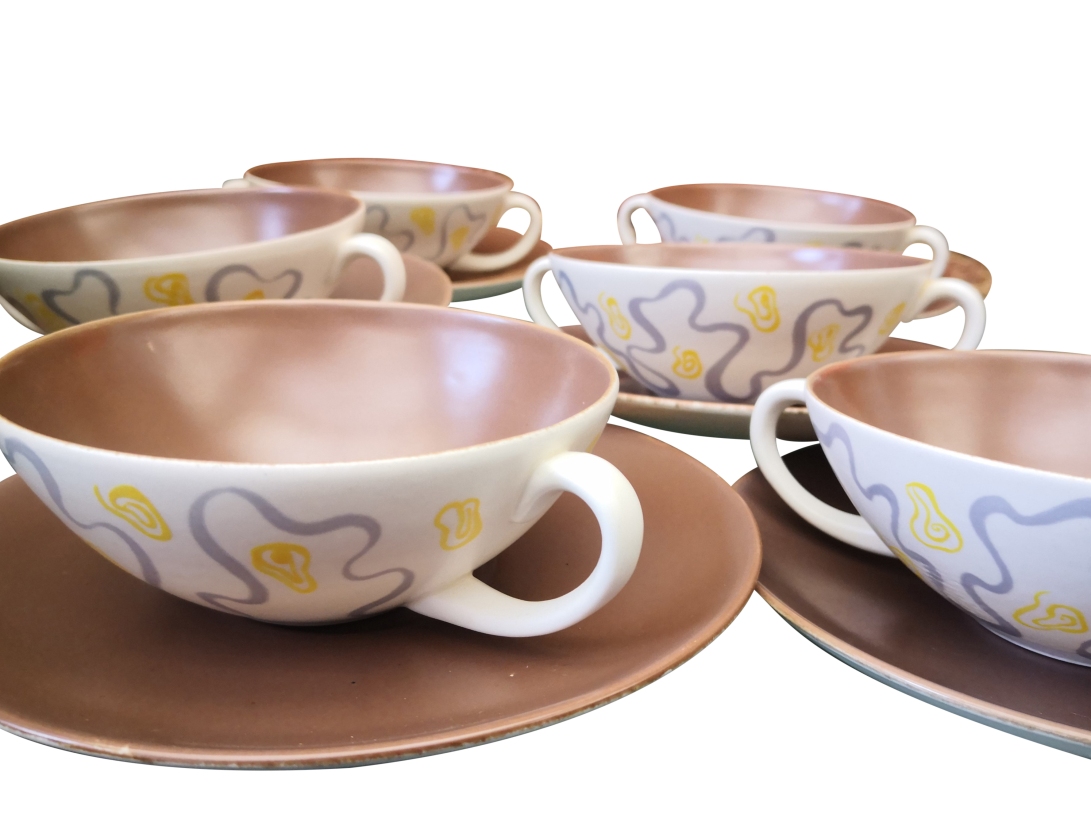 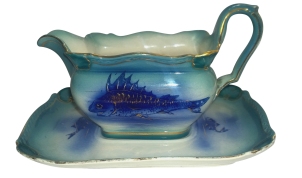 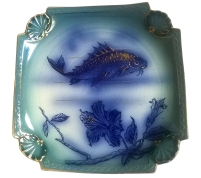 This Antique fish set was my favourite discovery of 2016.  It was made in a German factory known by the name of Franz Anton Mehlem and dates to the Art Nouveau period, probably between 1885 to 1905. Mehlem was in production until 1920 when the company was sold to Villeroy and Boch.  The factory existed under other names from 1755 and a new factory but came into it’s own in the late 19th century when they began using two coal-fired kilns instead of the old wood-burning type kiln in the previous facility.  At some point the company was renamed after the father of the two Mehlem brothers, Franz Anton Mehlem. The Mehlem company stood in direct competition with the famous company of Villeroy & Boch in Mettlach at one time, which may explain why they eventually brougth the Mehlem factory.

During the latter part of the 19th century  the factory was further modernised, a few new buildings were added and a lot of old technology was replaced.  New pump stations and transmissions were installed as well as modern machinery. When Everhard Mehlem died the factory changed hands again and in 1886, Franz Guilleaume, the current owner moved into the ‘Chateau du Rhin’, the Mehlem family home, which had actually been empty since the death of Everhard Joseph Mehlem in 1865. The year 1887 saw the installation of new mills and shortly afterwards a new steam engine replaced the old machinery used to knead the clay. The product range of the business changed significantly and they produced household, decorative, technical and sanitary items and also porcelain clock cases for the American Ansonia Clock Company during the latter part of the 19th century. Between 1887 and 1903 the company also produced Höchst figurines from the original molds from the defunct Höchst factory. This fish set was probably made about this time. Another two kilns and a chimney were installed around this time and the word ‘Royal’ and the year ‘1755’ were added to the company mark in 1890 and used until the company was sold to Villeroy & Boch.

This beautiful fish set, which is only missing the tureen, is an unusual example of their work as it’s flow blue with turquoise and gold and I’ve never seen one like it.  They produced a lot of beautiful fish sets, many white with beautifully painted fish but this is the first flow blue one I’ve seen.  There are about eight different types of fresh water fish depicted on these plates.

This is probably the most complete large tea set I’ve ever acquired.  In the 19th and early 20th century most tea services were for 12 with an enormous sugar bowl and a slop bowl too for the tea leaves.  I always wondered how one teapot filled all those cups but clearly they had to keep topping up and often they came with a large hot water jug as well.   This tea set has everything it would have had except either the slop bowl or the sugar bowl. It’s got one large bowl which could be the slop bowl or the sugar bowl, from now on it’s the sugar bowl.   People used to take a lot more sugar than they do now, hence very large sugar bowls.

If you find a Grindley item with Tunstall in the back stamp then it’s one of the older pieces prior to 1891.

Some of the items are marked with a pattern “Winthrop” but I can’t find any record of it and what’s really unusual about this set is that there are 41 pieces including the teapot, jug and sugar bowl and two cake plates. It’s rare to find 12 trios though.

I thought these guys deserved a mention on here.  I found them in the bottom of a box of junk and something told me they were interesting.  One was damaged and the other was in good condition, but minus the baize on the bottom.   I took one to a car boot sale and a dealer pounced on it instantly so I told him it was reserved for someone and took it home. I then took the undamaged one to an Antique and Vintage fair and a well known TV antiques dealer asked about him.   He told me that the pair would be much more interesting to a buyer,  so I reunited him with his friend and did some research. Turned out they were quite old, still struggling to work out whether they were cats or dogs but consensus seemed to be that one was a cat and one a dog.  Apparently they are Staffordshire and early to mid 18th Century.  Who would have thought it!   There was a lot of interest in them when I eventually got round to putting them online to sell them and they ended up in America.  It taught me a valuable lesson, always do your research first.

Here’s something a little unsual.   Bjorn Wiinblad is probably one of Denmark’s most famous mid century designers.   He was a painter and artist in ceramics and metalware and his work is famous throuout the world.  He was born in 1918 and died in 2006.  He was never conventionally Danish, and whilst functionalism ruled in Denmark, Bjørn Wiinblad had went in an entirely different direction using curves, rich colours and more hedonistic approaches.   I think this design for the high quality German porcelain company, Rosenthal is testament to that love of colour and pattern.  This is called Feuervogel or Firebird in English, and it’s really quite a rare design.   I was lucky enough to acquire 17 pieces in one lot and I’m strugging to part with them as they really are so beautiful and timeless. It’s hard to imagine when you look at them that the design is 50 years old.  I haven’t put all the pieces up for aslae.  These are living in my house at the moment until I tired of looking at them ( might be a whilte) but a couple of the larger pieces are on my Antik Seramika Ebay shop 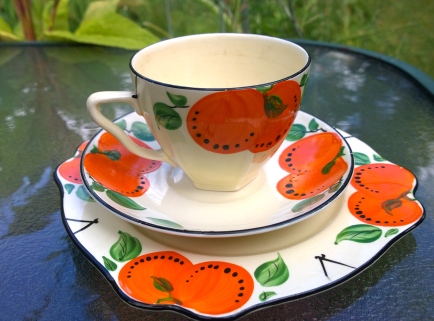 You might be forgiven for thinking these are art deco designs by Clarice Cliff, and as they are marked AJ Wilkinson, where Clarice was apprenticed at the age of 17 years, then the assumption would be understandable.   It was only after careful research that I realised this wasn’t the case at all.  Clarice went on to be very famous and of course she married the boss at Wilkinsons, Colley Shorter.  But at the time she joined the factory, her elder sister Dolly was actually Artistic director and this is one of the patterns, referred to simply as “Oranges” attributed to Dolly.

It certainly seems that a design flair ran in the family and this is one of my favourite patterns.   Another one that I wish I’d kept a little of for my own collection but I do so love to share the joy.  For some other art deco pieces, take a look at www.antikseramika, or my ebay shop http://stores.ebay.co.uk/Antik-Seramika or you can like my facebook page https://www.facebook.com/AntikSeramika/

The image above shows 15 beautiful handmade miniature balsa wood dolls, painted and decorated with wool and paper. Each doll has the nationality of a lady from that former Soviet country, in Russian on its base and is wearing the national costume of the country.  They appear to date from the late 1920s to 1940s and are extremely rare especially in the full set.  I fell in love with these and someone I knew had brought them, I didn’t even see them when I was looking around, but he kindly sold them to me.   I’ve only ever seen partial sets of these before so it was lovely to find the complete set.  These are now for sale on my website Antik Seramika.